Another enigma: reading the embroidered binding of MS. 8932

Jacqui Carey was the first recipient of the Wellcome Trust Library and Archive Research Bursaries scheme, and is analysing Wellcome Library MS. 8932 in order to learn more about bindings, embroidery and production methods dating from the medieval period. A version of this article was originally posted on 11 November 2015 on the Wellcome Library website. The version that follows includes exclusive photos.

As noted by Elma Brenner in her post ‘The enigma of the medieval almanac’, Wellcome Library MS. 8932, a folding almanac produced in England in the first part of the 15th century, is a remarkable object. The almanac is of great interest to historians because it is one of only a handful of such folding manuscripts, used by medical practitioners to harness astrological information relating to health, that survives. Yet I am particularly interested in the almanac’s exquisitely embroidered cover, because of my long-standing interest in textile techniques.

Wellcome Library MS. 8932 side view of folded sheets of parchment within the embroidered cover.

The actual act of making textiles is intangible and the practicalities are difficult to record, so archival documents tend to provide the contextual and supporting evidence for the study of historical techniques. Here, object-based research becomes key, as artefacts are the direct result of a production method. ‘Reading’ a textile, such as the cover of MS. 8932, can be an illuminating experience, but this process requires all the same considerations as historians encourage for text-based material.

Although the exact structure of an artefact can usually be determined, that artefact cannot conclusively reveal its method of production. It is tempting to impose onto a historic artefact our own modern-day understanding of how textiles are made, so it is important to observe what is actually there, not what one assumes or expects to be there.

Whilst a textile has the potential to have been constructed in a variety of ways, a detailed analysis of its structure can at least provide undeniable proof that can rule out certain techniques, and can even discount contemporary attempts to mimic the visual appearance of a historic item. Thus, it is important to establish the physical properties of the textile structure before embarking on any interpretation, much like obtaining an accurate transcription of a text before attempting to derive meaning from its content.

My initial response to the almanac was one of awe at the scale and intricacy of the work. The embroidered cover is – in my experience, having examined hundreds of embroideries – indeed unique, and analysing it is much like trying to read an extinct language. The discussion that follows will focus on just one component of the cover: the silk threads used in its construction.

Detail of one of the six different sections of embroidery, showing just over 1cm square.

There are three different types of silk thread found on the almanac. A loosely S-twisted, two-ply thread (type one) has been used for the functional sewing, as well as for the construction of the edge band and braid. The other two thread types have been used exclusively for the decorative embroidery. The first is a flossy silk (type two) whilst the other is highly twisted (type three). The two-ply and flossy silks are typical types of thread found on items from this period, but the twisted type is not. Close observation of worn sections has revealed that the twisted thread is actually what is known as a gimp thread, as the silk is wrapped around an inner core of silk.

Here, my large-scale reproduction samples shown below illustrate the difference between a two-ply thread and a gimp thread. Both samples have two components: one cream and the other brown. The top sample consists of components evenly twisted around each other, forming the typical two-ply thread that I would expect to see. Meanwhile, in the lower sample the cream element has been completely hidden, forming a core around which the brown component is wrapped.

Whilst silk gimp is not a unique find, it is normally a large-scale decorative feature, couched down onto fabric with a separate sewing thread. I have never seen gimp used to make embroidery stitches as it has been for this cover, and so far no one with whom I’ve consulted is aware of any comparable work of this nature. I would love to hear otherwise, if anyone has suggestions.

Today, the making of gimp is an industrialised process, and it is rare to find anyone who can produce gimp by hand. However, in the early 15th century techniques for spinning thread were commonplace, and gimp could easily have been produced using a wheel or drop spindle. 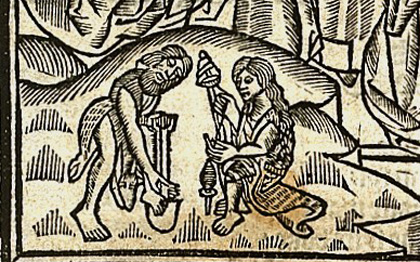 However, specialist spinning equipment has never been essential for making gimp, because any weighted object can be attached to the two silk components and twisted. One end of the core component needs to be secured to a fixed point, whilst the other end is knotted onto the wrapping component and the weight. As the weight is twisted, the wrapping component can be eased around the core, with the tension controlled by adjusting the angle between the two components. This short film demonstrates the process.

Yet quite why the almanac has been embroidered with a gimp thread remains open to question. It is not an issue of thrift: the core component is expensive silk, even though it could have been made from a more economic fibre such as linen. I am currently working to reproduce the embroidery, exploring the visual impact made by the gimp compared with more typical thread types. This practical experimentation may also expose any technical issues that might provide a reason as to why this special form of thread production was selected.

An investigation into the robustness of the gimp compared to other threads is also being undertaken, and this may be particularly pertinent, since other aspects of the cover suggest that it was designed for function and durability. Of course, all this may be immaterial, if the gimp is simply the whimsical demonstration of one person’s skill in plying thread. 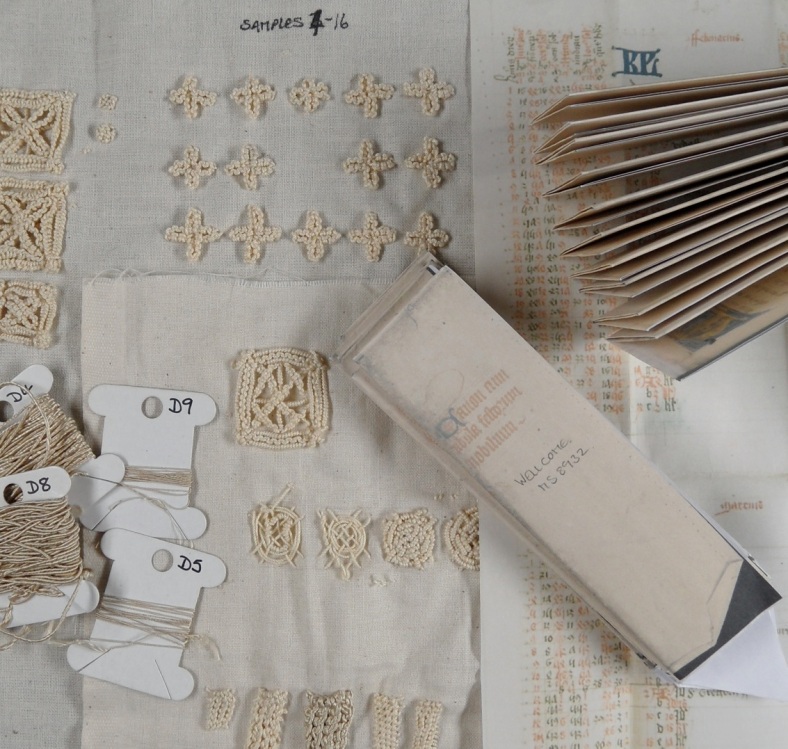 Making samples of different aspects of the almanac

Further reading:
Hilary M. Carey, ‘What is the folded almanac? The form and function of a key manuscript source for astro-medical practice in later medieval England’, Social History of Medicine, 16 (2003), 481–509.

Jacqui Carey is a textile craftsperson, with a passion for analysing historic artefacts in order to understand the what, why and how of past practice. She is currently a Wellcome Trust Research Bursary holder, studying the construction and possible methods of production of MS. 8932.

2 thoughts on “Another enigma: reading the embroidered binding of MS. 8932”