This is actually my second-favourite tool. My favourite was the hot-air pen/spatula that we bought when Arlington Conservation closed and auctioned off everything in 2017. It was from the 1970s, maybe 60s, German, looked really vintage and ridiculous, but worked just fine until one day it didn’t. (Now we have a modern, boring one.)

So that leaves my comedy board chopper. When I was recently graduated, before I had set up a studio, a bookbinder very kindly donated her tools to me in preparation for retirement. She said she knew how hard it was to start out on your own and she wanted to help someone. She said she had everything I needed to set up: hand tools, leather, papers, boards, board chopper… I leapt at the last one in particular – they’re so expensive! We rented a van and drove up to Bury St Edmund’s in Suffolk, where I discovered the board chopper was, in fact, a miniature one! Not a paper cutter or other flimsier cutter, it’s solid iron and designed for board, but… it’s small. It’s French, made by Rougier et Plé, a big art supply shop that sells bookbinding tools, although no longer board choppers as far as I can tell. The blade is about 18 inches. I recently had it sharpened, and they laughed at it – even though I had told them on the phone how big it was – saying it was hard to believe there was a board chopper small enough. It has a ruler on the table and a guide to clamp to the ruler, with a bent but still functional screw, though nothing to measure the size of what’s getting cut off. There are some holes that don’t seem to serve any function, and I wonder if something is missing. I would love to know if anyone else has, or has come across, a chopper like this.

To be fair, at the time we realised we didn’t actually have room in our two-bedroom flat for a normal-sized one. We already had my press in the living room; my mount and binder’s board were under our bed, and my small and very heavy flat files, dragged along with me every time I had moved after university, were under the spare-room bed. (Actually, they didn’t quite fit so we had chopped off one of the legs of the bed and the flat files took its place.) To make room for the comedy board chopper, we screwed it to a piece of board, to keep it from catching on the carpet, and I slid it under the dresser in our bedroom for safekeeping, sliding it back out when I needed it. I covered the handle in leather scraps to cushion it a bit, with yellow at the tip for more visibility in case it ever stuck out from the dresser and presented a trip hazard.

We’ve since established proper studios, of course, but the little board chopper is still useful, much in the way a small nipping press is sometimes preferable to a standing one. I keep it within arm’s reach of my bench, on top of my old metal flat files and another set discarded by the Victoria & Albert Museum, and it can fit smaller sheets of paper, as well as off-cuts of board and polyester sheet. To cut down larger pieces of board or make boxes, where real precision is necessary, I still use a normal board chopper, but this little green one is just so comical compared to anything I’d ever seen before that it holds a special place in the studio. And I think of the retired bookbinder every time I use her tools, forever grateful for her generosity in helping me make a start.

The handle made from leather scraps

The comedy board chopper from the side, showing you its full miniature status compared to normal-sized studio furniture

The ruler with the little bent screw

The photos above and below show the mystery holes; there is a corresponding set at the back of the machine as well. In the top photo, the threaded hole at the front intersects the larger hole, suggesting there was once a screw holding something in place there; it must have either been another measuring guide or perhaps something to catch off-cuts? 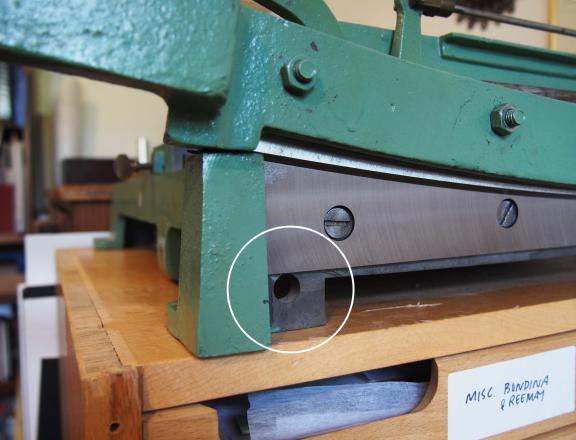 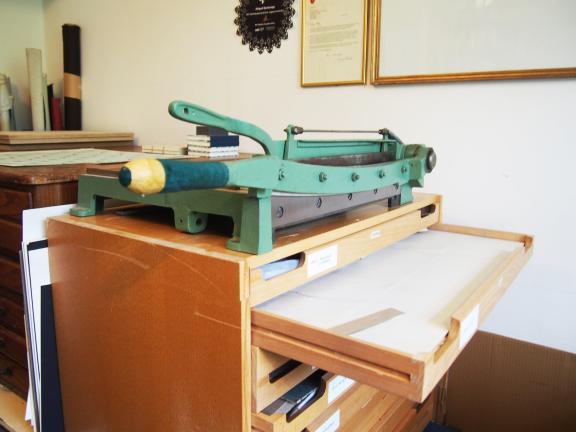 In the absence of something to catch off-cuts, an unplanned genius feature of putting the board chopper on top of flat files means that one can simply open a drawer temporarily to catch anything that falls, and then close it again for space savings.

Abigail Bainbridge is a book and paper conservator and co-owner of Bainbridge Conservation. She is Associate Tutor of Book Conservation at West Dean College and teaches short courses in conservation, bookbinding and letterpress at Richmond Art School, the London Centre for Book Arts and Women’s Studio Workshop (US). She has taught conservation science at Camberwell College of Arts and worked as a conservator at Columbia University and Paper Dragon Books (NYC). She has an MA (Distinction) in Conservation Studies from West Dean, where she investigated selective discolouration of seventeenth-century paper. Her current research is on eighteenth-century French binding. Abigail is an accredited member of the Institute of Conservation and the treasurer of its Book & Paper Group.