Many people may be unfamiliar with collotypes. Although these types of prints might not be encountered very often, their printed surface is fascinating under close observation, and they sometimes look like drawings at first glance. They are both beautiful and mysterious, and warrant exploration.

How to recognise a collotype

The first clue that collotype printing might be present is that all the lines and the edges of any blocks of printing are very slightly hazy. The edge of the printed line is never quite sharp, and when viewed with a magnifying glass or linen tester the reason becomes clear: the ink is printed as millions of tiny crescents, very densely packed where tone is strong, but visible individually at the very edges.

The essential aid to print recognition is, of course, Bamber Gascoigne’s ‘How to Identify Prints‘. He includes a description of the collotype printing method and tips on distinguishing it from other processes, including the advice that ‘through the x 30 microscope, with its own built-in light, the ink will gleam with exceptionally bright highlights which make it look almost like enamel. This seems to be a characteristic shared by no other process’.

Collotype prints might frequently be misidentified, but their very clear and fine-grain pattern really does help set them apart from prints produced using other processes, once examined by an experienced viewer. In fact, the grain is so fine that its scale can be even smaller than that of the felt pattern of the paper on which it is printed. This does suggest another possible source of misidentification: very slight bleeding of ink that, upon application, interacts with the surface texture of paper might superficially resemble collotype printing. Examples of this include felt-tip pen drawings and documents produced using early office copying processes, such as hectographs or mimeographs. Plenty of other clues should help identify collotypes, however, such as how evenly the ink is applied and the results of solubility testing. 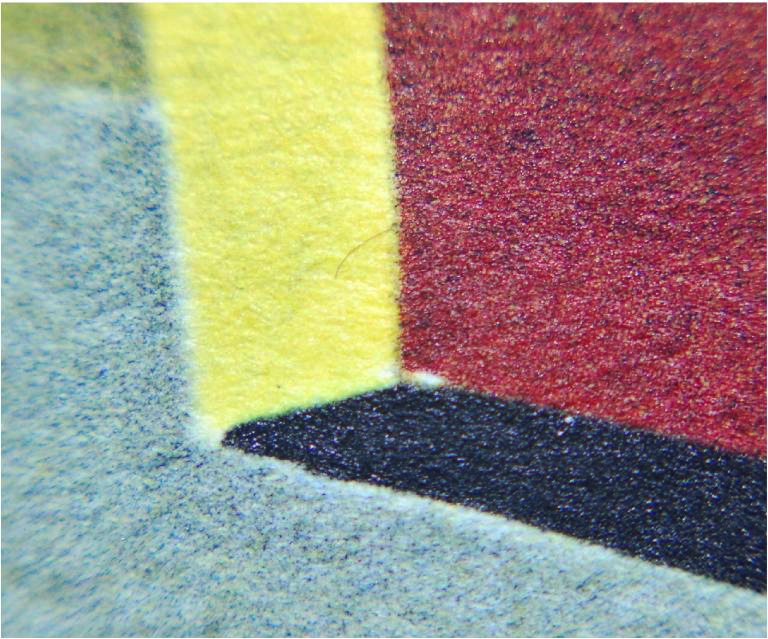 The above detail image of a colour collotype was taken using a DSLR camera with 18-55mm and +12.5 macro lenses and torchlight. Note the reflections from the ink surface as described by Gascoigne. This collotype is a signed reproduction of Zaha Hadid’s 1989 painting for Hafenstrasse, Hamburg. 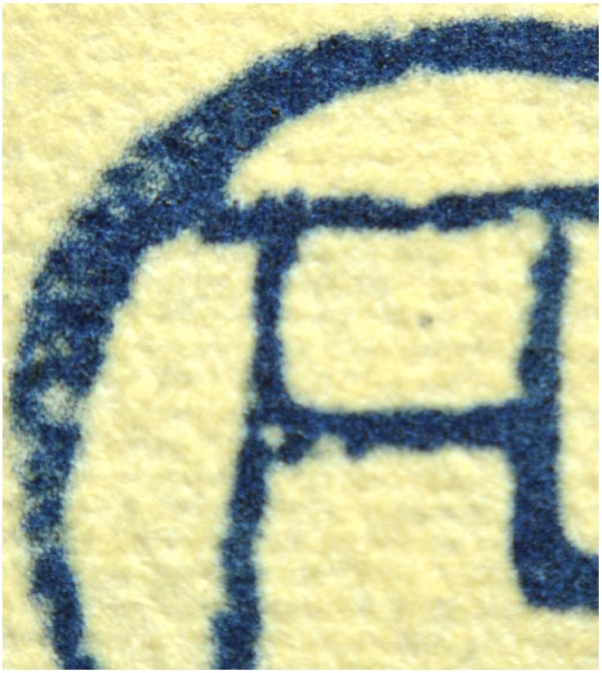 The collotype detail image above was taken using a DSLR camera with 18-55mm and +12.5 macro lenses. Note the texture of the printed areas: crescent shapes are visible towards the edges, which lends the edges a rather diffuse appearance, even from a distance. The print was assessed as being a late reproduction of a Toulouse-Lautrec artwork, with the image printed by collotype in blue ink over an existing ink layer to adjust the paper tone. 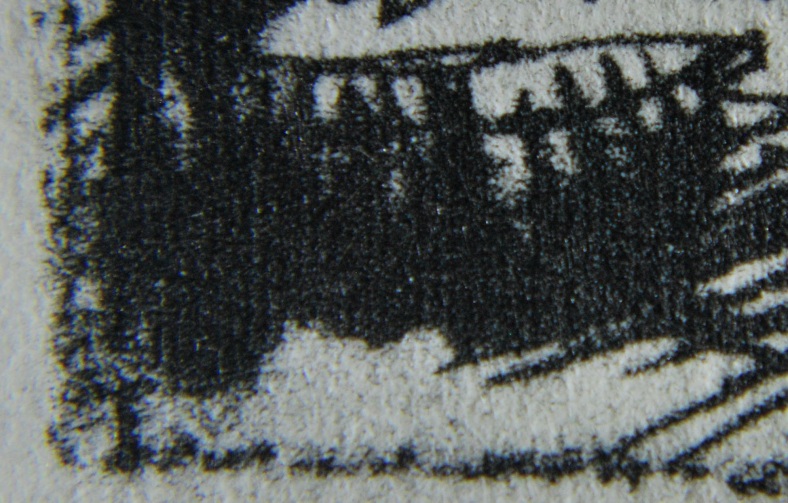 This detail image of a Rembrandt print, produced by the Cotswold Collotype Printers and held as part of the Camberwell Collection, shows the tone areas’ edges to be rather diffuse and composed of groups of incredibly fine curving lines, as opposed to the very definite edge presented by areas of tone produced with techniques such as engraving or relief printing. Like the other detail images, it was taken using a DSLR camera with 18-55mm and +12.5 macro lenses.

The process was invented in the mid-nineteenth century, and a decade of development saw it become the first economically viable way of reproducing photographs in print, with one of its great benefits being the successful representation of pale areas of tone without the need to reinforce the printing matrix by hand. Collotype printing is a planographic technique, with prints taken from a gelatine matrix. It is carried out by exposing a negative image onto the light-sensitised gelatine, with greater light exposure encouraging the gelatine to harden and promoting the development of broader and more frequent cracks. When pre-wet (in a similar way as for a lithograph plate), non-hardened areas reject the applied ink, while hardened and cracked areas accept it. The process, including preparation of the negative, has been recorded by the Benrido Collotype Atelier in Kyoto, Japan.

The collotype process has always been a specialist one requiring great skill, and its use declined during the second half of the twentieth century as process lithography became more ubiquitous. The major practitioners that remain in operation are Benrido (Kyoto), Lichtdruck-Kunst (Leipzig) and Alinari (Florence). In the UK, artist and lecturer Dr Paul Thirkell is a noteworthy advocate, and the process has been documented by the Centre for Fine Print Research.

Collotype printing is best suited to print runs of a few hundred; uses have included bookplates, postcards, editioned prints and un-numbered reproductions. Bamber Gascoigne wrote in 1986, just after the closure of the last specialist collotype printer in the UK, that ‘it has often been used in Britain by local libraries to provide superb and modestly priced reproductions of prints in their collections… they will often turn up round the corner coloured, framed, and multiplied fifty times in price’.

I have come across both artist-commissioned collotypes and later reproductions in my day-to-day work as a conservator. Some of the most interesting examples have been mixed-technique prints combining collotype and pochoir stencilling depicting Picasso’s costume designs for Le Tricorne.

Craig Horsfall is currently the Specialist Conservation Technician for the MA Conservation course at Camberwell College of Arts, University of the Arts London.  He studied Fine Art Paper Conservation at Northumbria University, has worked at Museum Conservation Sciences and John Jones, and is an accredited conservator.  He has had an interest in printing processes since studying Fine Art Printmaking at Gray’s School of Art, Robert Gordon University.

Gascoigne, B. (2004) How to identify prints: A complete guide to manual and mechanical processes from woodcut to ink jet. 2nd edn. New York: Thames and Hudson.