In the House of Lords, the Lord Speaker sits on a woolsack, reflecting the importance of wool to the economy of the Middle Ages. However, the role that sheep have played in the preservation of our legal system is less well known. Thousands (if not millions) of sheepskins survive in this country as legal documents. We don’t know why lawyers in the past chose sheep for their deeds and indentures; it might have been an early anti-fraud device. The Dialogue Concerning the Exchequer, written in 1180, states, “For the writing of the roll has this in common with charters and other letters patent, that it may not be erased: and for this reason care has been taken to make them of sheep-skins; for they do not easily yield to erasure without the blemish becoming apparent.” For whatever reason they were preferred, sheepskins were stretched, scraped and worked to produce a writing medium so successful that its use only waned in the 20th century, with the advent of the typewriter and the concomitant demise of the scribe.

Now, in the digital age where scanning and digitization of documents is commonplace, maintaining these documents has become less of a priority, to the extent that in many cases they are being disposed of or destroyed. However, this is overlooking an important aspect of these documents, not just the text they carry but also the physical documents themselves, the sheepskins. Hidden in offices and archives around the country is the genetic history of livestock extending back almost a millennium. There is no other resource so well preserved, so well documented and so abundant as that of the English legal system. Aside from the text it carries, each document is a sheepskin: a biomolecular record just waiting to be read.

In a paper published in December 2015 in Philosophical Transactions of the Royal Society1, a team from Ireland and Britain reported that they had been able to extract ancient DNA and protein from tiny samples of parchment from documents from the late 17th and late 18th centuries. The research revealed that a 17th-century legal document from York showed a strong affinity with northern Britain Breeds, specifically the region in which black-faced breeds such as Swaledale, Rough Fell and Scottish Blackface were, and still are, common. A corresponding 18th-century sample showed a closer affinity with the Midlands and southern Britain, where the famous agricultural reformer Robert Bakewell (1725–1795) was developing the Leicester Longwool breed. 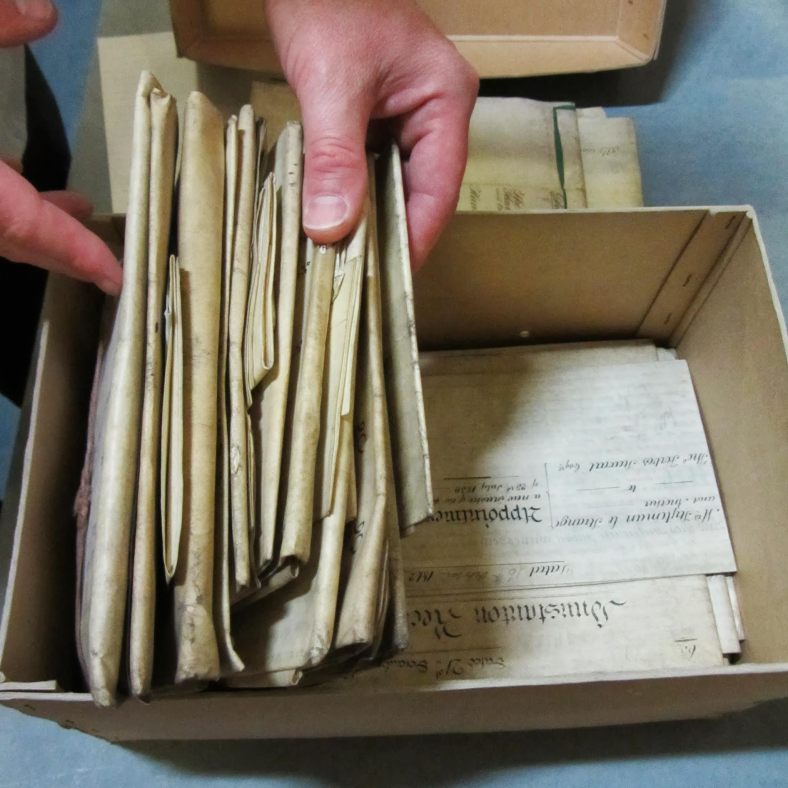 Their work suggests that legal documents offer tremendous scope for documenting the loss of genetic diversity in sheep breeds that happened as a consequence of Bakewell’s maxim of breeding ‘in-and-in’.  It is important to better document the genetics of today’s rare breeds and contrast these with the animals that were preadapted for different economic and environmental forces that shaped the last 1,000 years of animal husbandry.

Parchment has a number of properties that make it compelling material for DNA extraction and analysis. Its manufacture results in robust artefacts that can survive intact for many centuries, and because of their enduring legal value they have been carefully managed. Unlike bone remains, of which only a small percentage has been excavated, parchments are above ground, archived and, in the case of legal documents, directly related to specific dates – a level of resolution largely unachievable with any other historic DNA source. Even undated documents can be dated palaeographically to a resolution better and cheaper than radiocarbon dating.

The researchers are hoping to create a ‘biomolecular archive’ using either fragments or complete documents. This archive would preserve the genetic history of livestock and offer scholars the possibility to analyse and understand more about these historic breeds. They also want to learn more about where solicitors bought parchment from and how often they purchased supplies. Does the date on the deed reflect the demise of the animal? If you are interested in helping with their project, please contact Professor Matthew Collins from the University of York, email: matthew.collins@york.ac.uk

The application of ZooMS to parchment samples. Samples are first extracted using the triboelectric effect, then the collagen is extracted, cleaved by the enzyme trypsin into short fragments, before the analysis by MALDI-TOF MS.

All images courtesy of the Norfolk Record Office.

Dr Matthew Collins is Professor of Archaeology at the University of York and founder of BioArCh, a joint initiative between the Departments of Biology, Chemistry and Archaeology to further the use of biomolecular methods to tackle archaeological problems. His research focuses on the persistence of proteins in ancient samples, using modelling to explore the racemization of amino acids and thermal history to predict the survival of DNA and other molecules.  In particular, he is interested in developing technological solutions of direct practical application in the humanities.

Dr Sarah Fiddyment received her BSc in Biochemistry from the University of Zaragoza (Spain) in 2006, having completed three years of medical school and two years’ specialization in Biochemistry. Her MSc and subsequent PhD (awarded in 2011) were both completed at the same university, in the field of proteomics in cardiovascular research. She moved to the University of York after being awarded a Marie Curie postdoctoral research fellowship to focus on the proteomic analysis of parchments throughout history. She is currently a British Academy Postdoctoral Fellow at BioArCh (Department of Archaeology).

One thought on “Soliciting sheep”