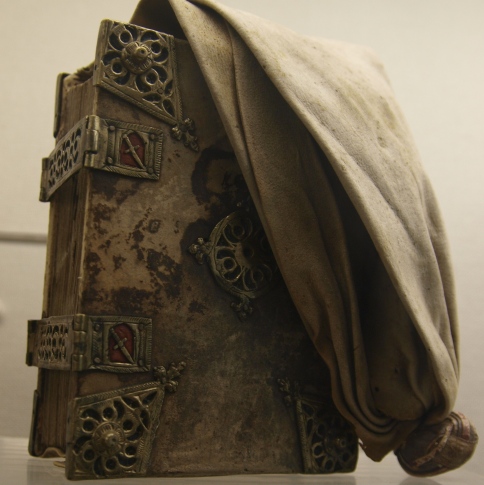 Ligatus is delighted to announce a public lecture on the history and conservation of medieval girdle books by Professor Margit Smith. For hundreds of years before the invention of pockets, various small objects such as scissors, keys, pomanders, folded almanacs and miniature metal-covered books were worn suspended from the belt. The girdle book was also carried this way, bound with an extension of the leather covering from the lower edges of its boards, which allowed it to be hung from the belt, or girdle. By being carried at the belt, or by hand, grasping the extension of the cover, the book was meant always to be readily available to its owner, and by being hung upside down from its lower edge, it would be the right way up to read when raised from the belt. It makes its appearance in the later medieval period, mostly as a rather utilitarian object, but occasionally a highly decorative one. Although only a small number survive, it was frequently depicted in art.

Prof. Smith worked as an academic librarian in various libraries, including the British Library of Political and Economic Science at the London School of Economics. She retired six years ago after nearly 20 years as Head of Cataloging and Preservation at the Copley Library at the University of San Diego. She works in her studio on commissions to repair or rebind damaged books and documents and occasionally teaches classes of “Basic Bookbinding for the General Collection”.

Prof Smith’s manuscript The medieval girdle book has been accepted for publication by Oak Knoll Press in Delaware. It will provide a source of comprehensive documentation of increasing importance to scholars of codicology and the history of books.

The talk is open to all and will be followed by drinks and refreshments.
Tickets: £5 (Standard) | £3 (Students)