Ed. note: a version of this article originally appeared in the May 2014 issue of Icon News.

Dr Brian Davies delivered his lecture on ‘Making and Colouring the Medieval Book’ in the Grand Robing Room at Freemasons’ Hall. The room had a great atmosphere and was attended by a large audience. A huge screen, as grand as the room, gave excellent visibility for Brian’s elaborate PowerPoint presentation.

Since retiring from a senior lectureship in biochemistry at Aberystwyth University, Brian has been involved in archive conservation training and in lecturing in the UK and abroad on the historical and chemical aspects of the uses of dyes and pigments.

Brian’s lecture covered a wide range of subjects, from parchment production to modern pigment analysis. The lecture was very well structured and illustrated with plenty of evidence, historical, scientific and artistic, and was delivered clearly. Key topics included the writing substrates, parchment and paper, methods for laying out the written page, and writing tools. A great deal of attention was paid to inks and pigments, their composition, application and deterioration.

A timeline was used in the lecture to show that the medieval palette was largely mineral-based, for developments in chemistry and synthetic pigments were yet to come. While scribes kept their inks in inverted cattle horns, the illuminators’ paints were prepared in oyster or mussel shells. They used red, blue and green paints, while gold leaf was used for their most precious work. Colours were prepared as paint, a mixture of pigment, binder and a solvent, while gold leaf was applied to a layer containing red bole and egg-white glair as adhesive.

Carbon ink, used in Roman times, was gradually replaced by iron-gall ink. The former, though chemically inert, was vulnerable to physical damage, while the latter, acting as a penetrating dye as well as remaining on the surface of the substrate, could in some cases lead to corrosion, particularly of paper.

Most medieval pigments were chemically stable, but verdigris has caused problems on both parchment and paper, migrating, striking through and staining the substrate and, in extreme cases, causing its disintegration. Brian demonstrated that, when prepared from copper and vinegar, verdigris contains up to eight components that range in colour from blue to green, with all shades in between. These are much in evidence in medieval Welsh texts, where decorated letters alternate in red and green, rather than the red and blue pattern common elsewhere.

Corrosion caused by the copper of verdigris is in many ways analogous to that caused by the iron of iron-gall ink, as both metals initiate the formation of damaging reactive oxygen species. Brian noted that the corrosive effects of verdigris can be reduced by the addition of saffron, which is known today to have antioxidant properties. Although this effect was described in sixteenth-century Persian literature, no protective role for saffron was envisaged in medieval Europe, where texts only recommended the addition of saffron to verdigris to achieve different shades of green. A number of methods are presently being investigated for treating copper corrosion, which are likely to parallel the phytate treatment that has been successful in stabilising iron-gall ink.

Throughout, Brian referred to the use of modern, non-invasive analytical techniques, such as micro-Raman spectroscopy for identifying compounds and X-ray fluorescence for detecting elements. Knowing the nature of the materials of a manuscript is essential for the conservator, but these methods have also been used to identify eighteenth- or nineteenth-century pigments in manuscript pages purported to be medieval.

Towards the end of the lecture, we saw how copies of the Gutenberg Bible, all with identically printed text, were decorated by different illuminators. Printed rubrication was also attempted in Mainz, and Gutenberg’s colleagues succeeded in printing initial letters in colour for a psalter. For centuries, though, colour illustration in books was to depend on hand-coloured printed woodblocks and engravings. Brian concluded his lecture by paying tribute to the artists and craftsmen involved in ‘Making and Colouring the Medieval Book’.

The talk was followed by questions to Brian and refreshments provided by the Independent Paper Conservators’ Group. It was a great opportunity to catch up with my friends and colleagues, and my only regret was that I could not stay long enough to speak to everyone! It was a fruitful evening and I am already looking forward to the next lecture. 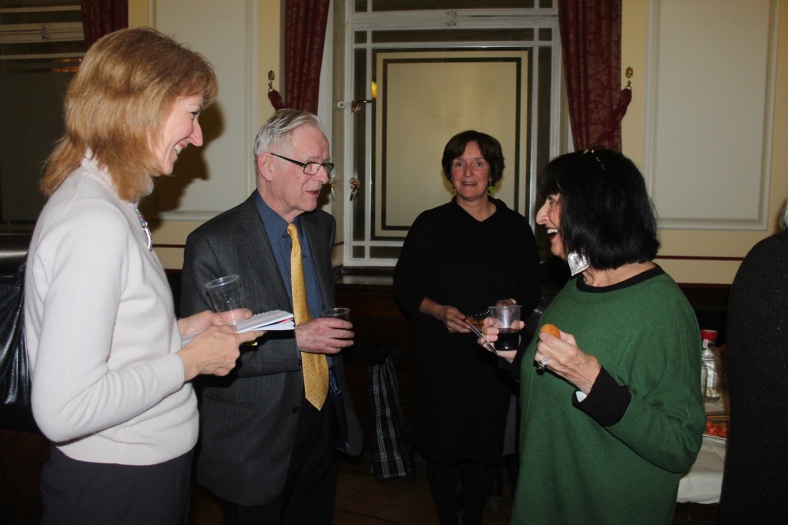 Sayaka Fukuda received a BA in Photography from Nihon University, a BA in Book Arts and Crafts from London College of Printing, and an MA in Conservation Studies from West Dean College, University of Sussex. She is currently an independent book conservator/binder based in South London, working for institutions as well as private clients. Her ongoing interest is to learn and share knowledge on the current situation of Japanese papermaking.