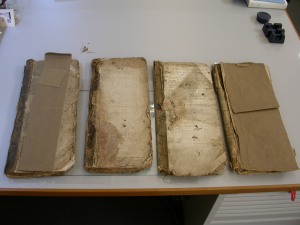 The repair of the University College Buttery books is an interesting and intriguing stationery bindings conservation project for two conservators at the Oxford Conservation Consortium, myself and Celia Withycombe. There are four books in the studio for repair dating from the early 1640s, forming part of a longer series of records connected with the domestic accounts of the College. The 1640s was an interesting time for Oxford and for the Colleges as England was in the grip of the Civil War and Oxford was a Royalist stronghold. As domestic accounts, these books give very detailed information about who was in College during this time and therefore who could not afford, either politically or economically, to flee the city.

Their condition offers many exciting conservation possibilities and challenges, as you can see from the images. They are currently textblocks without bindings, although there is tantalising evidence on two of the books of a tanned leather spine which seems to be hair side uppermost and not a reverse skin. The textblock is sewn on alum-tawed supports and is reasonably sound in all the books, although the spines are very distorted through use and poor storage. As it is likely the books lost their bindings some time ago the edges of the folios are dirty, damaged and softened and in some places substantial losses have occurred. 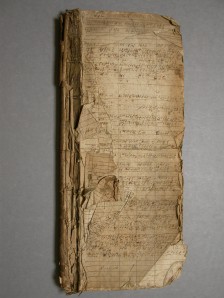 The project to rebind these books poses many questions when deciding on a suitable treatment. The most obvious and pressing are the missing bindings. Clearly there is evidence for a tanned full or half binding which can not be ignored despite the lack of contemporary bindings in tanned skins in the other Consortium College collections. There are many examples of parchment bindings and we have found some evidence for reverse skins being used at around this date as you would expect in stationery work, but no examples of conventionally bound tanned leather bindings. 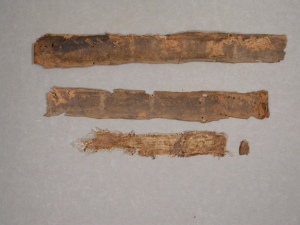 Another interesting find were the large quantities of coarse wood chips, roughly pyramidal in shape, that appear scattered in the gutters throughout the volumes. 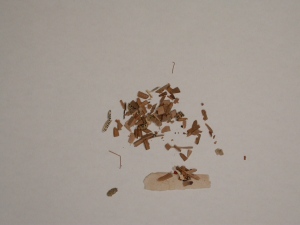 Several hypotheses have been put forward for the origin or purpose of these chips including blotting sand and pencil shavings. However, a convincing argument has been found for them being the whittlings of tally sticks. These were a means by which people could run an account with the Buttery of the College, rather like modern day battels, with a notch being taken from the stick according to how much an individual had spent. This suggestion ties in very well with their use as daily accounts of activity within the College kitchens and dining hall.  For further information on tally sticks see http://www.nationalarchives.gov.uk/museum/item.asp?item_id=6.

We would be very interested if anyone has examples of tanned leather bound stationery bindings from this date for us to look at and help in our accurate reconstruction of these important books. If you have information please email me at victoria.stevens@magd.ox.ac.uk.