Scrapbooks are unique and often deeply personal objects that can provide fascinating insights into the life of an individual or group of people. They can be found in most collections around the world, and due to the huge range of binding structures and their contents, each object presents different issues for discussion regarding its importance, function and conservation.

Scrapbooking in Britain peaked in popularity during the nineteenth century, as a cheap, easy and accessible form of self-expression and entertainment. The major technological developments of the period facilitated the increased production of cheap stationery bindings as well as the affordability and variety of ephemera which could be kept within them, including printed scraps, photographs, textiles and botanical specimens, as well as artwork and text. This resulted in a huge range of scrapbook binding structures, which, when combined with the variety of their contents, can raise complex conservation issues. The damage and deterioration of scrapbooks is typically due to a combination of low-quality materials, wear and tear due to their practical use, overfilling, and the types of materials, adhesives and media in them.

The project and context

My final project for my MA in Conservation at London’s Camberwell College of Arts focused on the conservation of an early Victorian scrapbook from 1837, which was owned by Elizabeth Anne Galton (1808 – 1906), sister of the Victorian scientist Sir Francis Galton and cousin of Charles Darwin. It is part of the Galton Archive at University College London.

One of the things I found most fascinating about working on this object was thinking about it within the wider social context of Elizabeth’s life, and how it is an example of the limited pastimes available to a woman of her position in society. Elizabeth’s watercolour landscapes, botanical illustrations and still-lifes reflect Victorian society’s rigid expectations of women, who were encouraged to pursue more private and trivial forms of artistic expression such as scrapbooking, rather than become professional artists. However, the contents of what turned out to be as much a sketchbook as a scrapbook also indicate an interest and engagement with the wider cultural interests of the period, including the Gothic Revival. Elizabeth’s illuminated manuscript-style illustrations employ gold leaf and shell gold to a high standard, and show not only artistic skill but also an interest in broader cultural conversations of the day, beyond those associated with a merely idle, amateur, hobby.

My proposed treatment of this scrapbook had to carefully balance maintaining the volume’s integrity as a unique historical object with improving its condition to ensure it is able to function as an object for research within the archive collection. 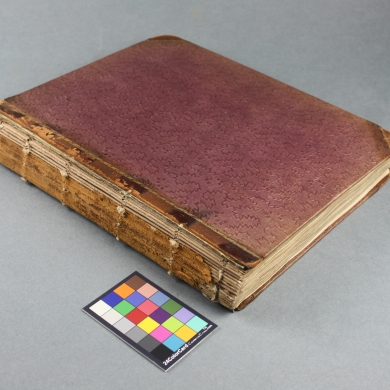 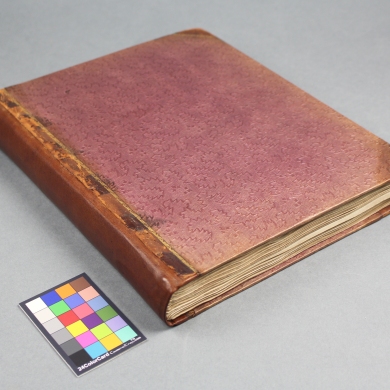 It was in an unstable condition when it came to me, due to a combination of poor-quality materials and mishandling during its lifetime, which meant it was not safe to be used for research purposes.

The volume consisted of eighteen gatherings of cream and brown paper, each with a hooked stub to provide compensation. The scrapbook had been sewn on four small cords, all of which had broken along each joint, resulting in both boards becoming detached. There were also multiple breaks in the sewing and damage to all four corners, and the majority of the spine leather was damaged or missing. 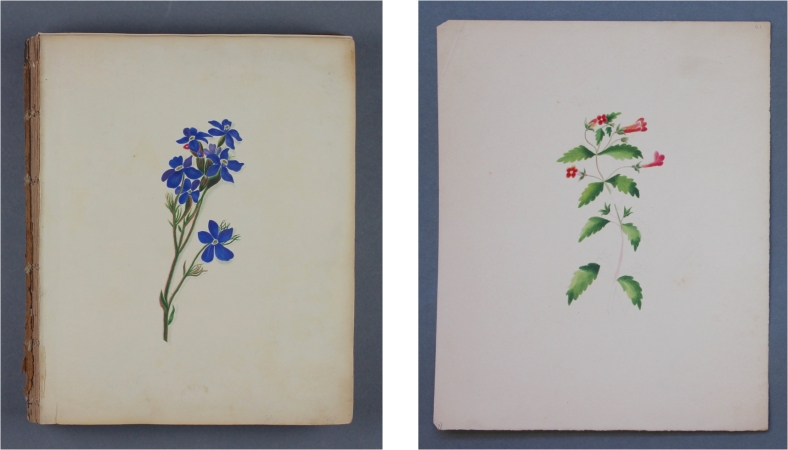 However, the contents of the scrapbook were in an overall stable condition and evidenced a wide range of skills and techniques using a variety of media. They included paintings, illustrations and sketches, on a variety of subjects such as botanical illustrations, still lifes, figures, buildings and landscapes, which had been both pasted into the volume and executed directly onto the pages.

As the aim of the project was to stabilise the structure to make the contents accessible for researchers, I first disbound the volume in order to clean the pages. This included the consolidation with 0.5% Bermocoll of unstable and cracking gouache paint used on some of the pages. The degraded leather on the boards was consolidated using 1% Klucel G in isopropanol, and all four corners were rebuilt with cellulose powder and then covered in toned Japanese paper. 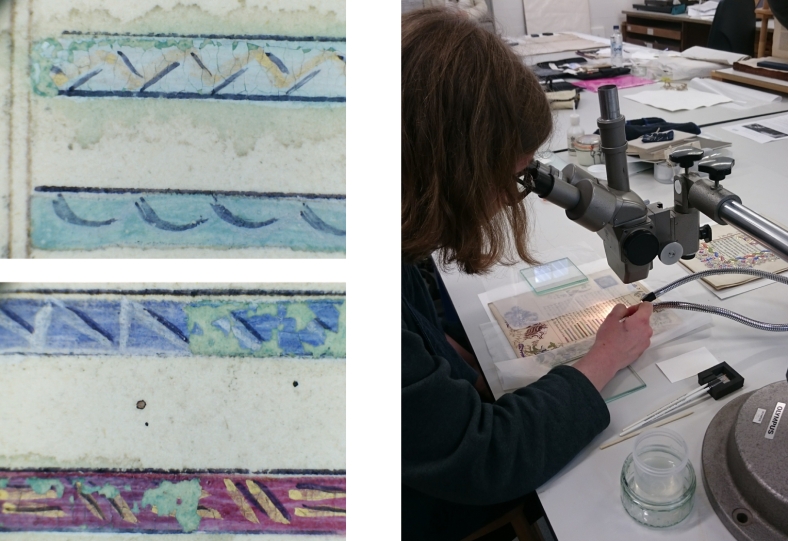 The text block was prepared for resewing by guarding the outer bifolia of the sections that had been most weakened by the adhesive on the spine, using thin strips of toned Japanese tissue. The volume was then re-sewn on Pleister tapes with a hypodermic needle inserted from the inside of the section to guide the needle through the original sewing holes. 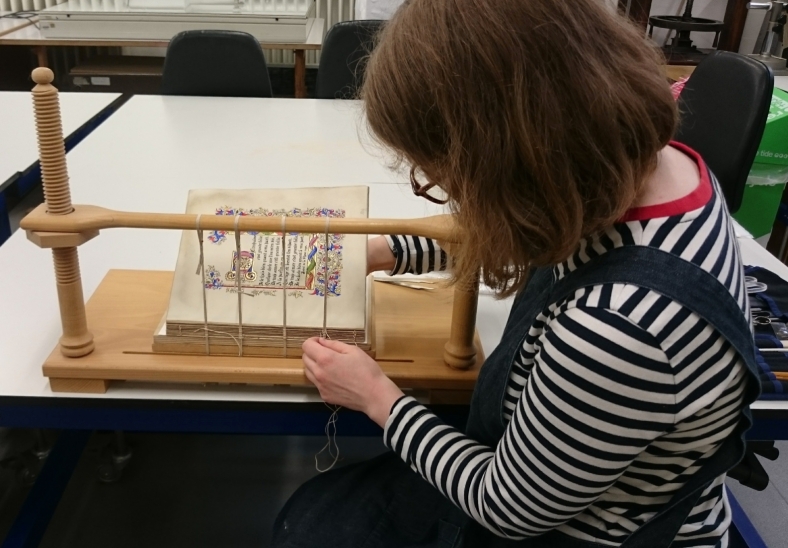 The boards were then reattached with panels of aerolinen inserted into slots cut into the edge of the boards, and a one-on-two-off hollow spine was created from manilla card. Finally, archival calf was toned to a sympathetic hue and the volume was rebacked.

Evaluation of the project

Overall, the conservation work on the scrapbook was concluded to have been a success, as the treatment carried out was able to retain the volume’s integrity as a unique and personal scrapbook, preserving its original aesthetic and history whilst also ensuring it is now in a stable condition to be handled and displayed. 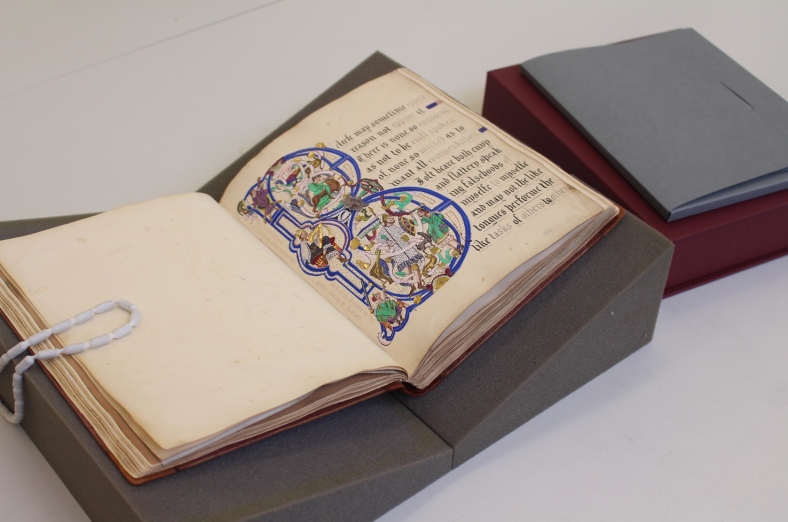 Through the treatment of this scrapbook, the illustrations and artwork of Elizabeth Anne Galton not only are now able to be properly explored on their own merit, but also provide material for wider areas of research such as Victorian scrapbooking and female amateur art in the nineteenth century.

Images reproduced with the permission of UCL Special Collections.

Alice Evans graduated in July 2017 with an MA in Conservation from Camberwell College of Arts, where she specialised in books and archival material. Having had placements in national institutions, private studios and binderies during her studies, Alice started working in the Book Conservation team at the Bodleian Libraries in Oxford upon graduating from Camberwell.